An exceptional operation for Geomines in the Somme

A project of extraordinary scope

At the end of 2021, Geomines has been chosen to carry out the diagnosis of pyrotechnic pollution and the pyrotechnic decontamination in the municipality of Ablaincourt-Pressoir. The developer Stonehedge has to realise earthworks in order to build a logistics platform on a 220,000 m² plot.

Albaincourt is an area particularly marked by the scars of the First World War. As early as 1914, the battle of the Marne partially affected the surrounding territories. Then, during the battle of the Somme in 1916, Ablaincourt found itself at the heart of the world conflict. The artillery batteries and other blockhouses that occupied the territory were the result of numerous battles between French, British, and German soldiers on the outskirts of the town, leading to the presence of explosive remnants of war (ERW).

To avoid any danger for the construction site teams, the company has chosen to call on Geomines’ experience to carry out the pyrotechnical securing of the area concerned at the beginning of 2022.

In order to diagnose the pyrotechnic pollution and to clean up the area, Geomines’ teams had to deploy methodologies adapted to the scale of such a project. In total, 3,372 munitions were uncovered during the operations, of which almost 3,000 remained active. Among these, there is an overrepresentation of grenades (hand grenades, 1915 F1 grenades, VB grenades…) with almost 2,500 examples. In addition, there were nearly 270 shells of all sizes and diameters (7,7 cm; 75 mm…). Finally, no less than 750 kg of small-caliber cartridges from the fighting were counted. The management of the still active ammunition and their removal were entrusted to the Demining Service of the Laon préfecture.

Tiphaine Zitter, head of Geomines’ Geophysics Department, says: “At first glance, a diagnosis like the one for the Ablancourt parcel does not present any particular difficulties. On the contrary, the fact that the right-of-way was an agricultural area suggest that there will be few saturated zones. Finally, the discovery of a trench crossing contradicted this intuition. Several difficulties had to be faced:

Furthermore, the density of the targets at different depths made their identification complex. Some of the magnetic anomalies uncovered turned out to be a superposition of targets (notably several shells placed on the same point at different depths), which renders most of the usual approaches to categorization obsolete.

On the other hand, the specificity of the fighting that took place at Ablaincourt generated a large mass of small ferromagnetic elements, some of which were either too small or too buried to be detected by the sensors. 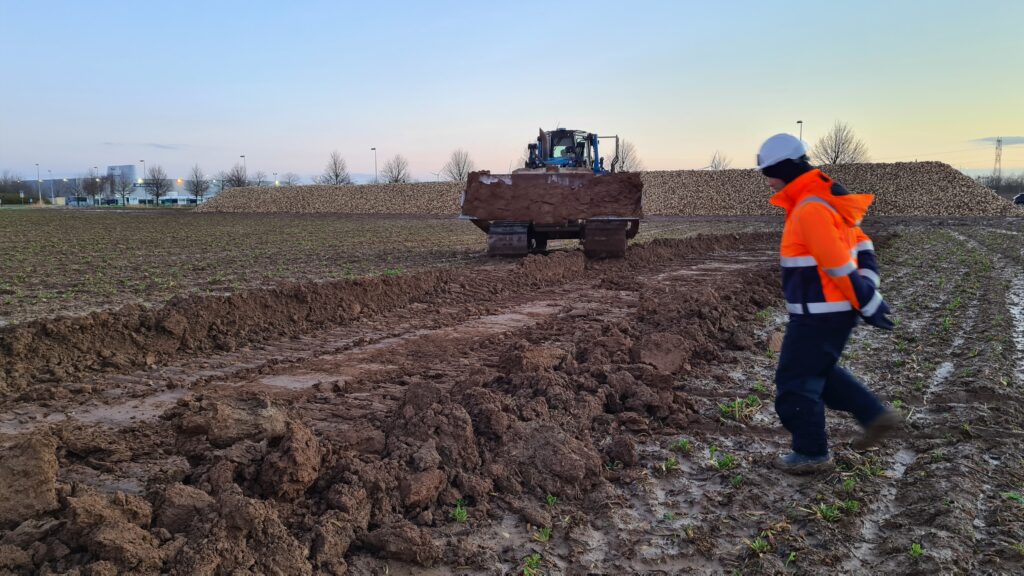 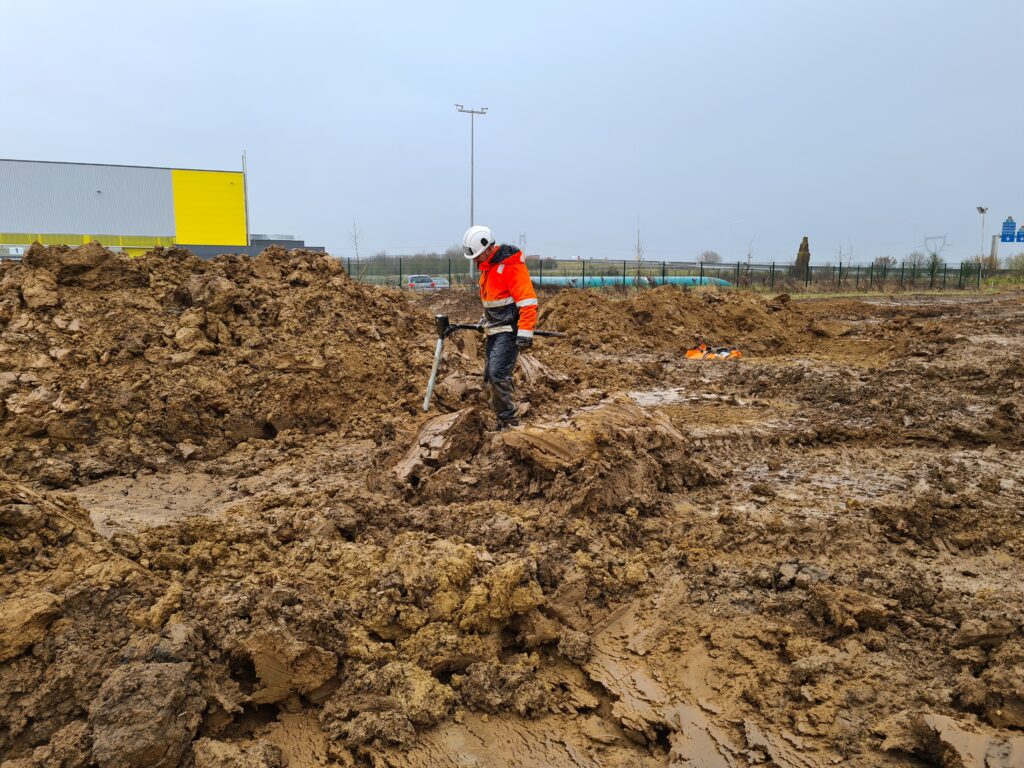 The second phase of the operations, the pyrotechnical clean-up, took place over three months, with a site manager and five pairs composed of an operator and an assistant operator.

From the identification and relocation of anomalous areas, notably using GPS techniques, to the categorization of risks and the uncovering of anomalies, the pyrotechnic clearance teams chose to employ a progressive stripping of the area, in order to safety uncover as many remains as possible of the former World War I trench in the saturated space.

Antoine Desmants, our Chief of Operations, explains : “We were confronted with a World War I battlefield where two trenches crossed. The existence of these dugouts meant not only the presence of a large number of fired and unexploded ammunition, munition stocks, but also the presence of many ferrous objects (trench tools, weapons, personal objects and soldiers’ equipment). These high concentrations of magnetic signatures resulted in saturation of the detection means and implied a complete stripping of these areas. 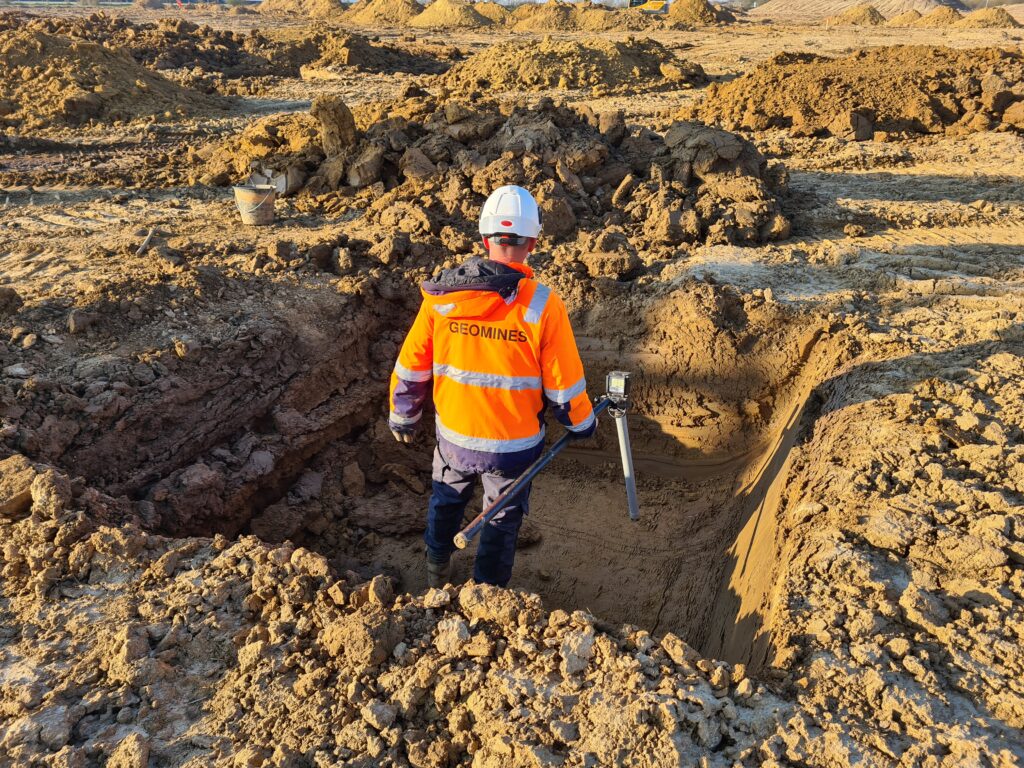 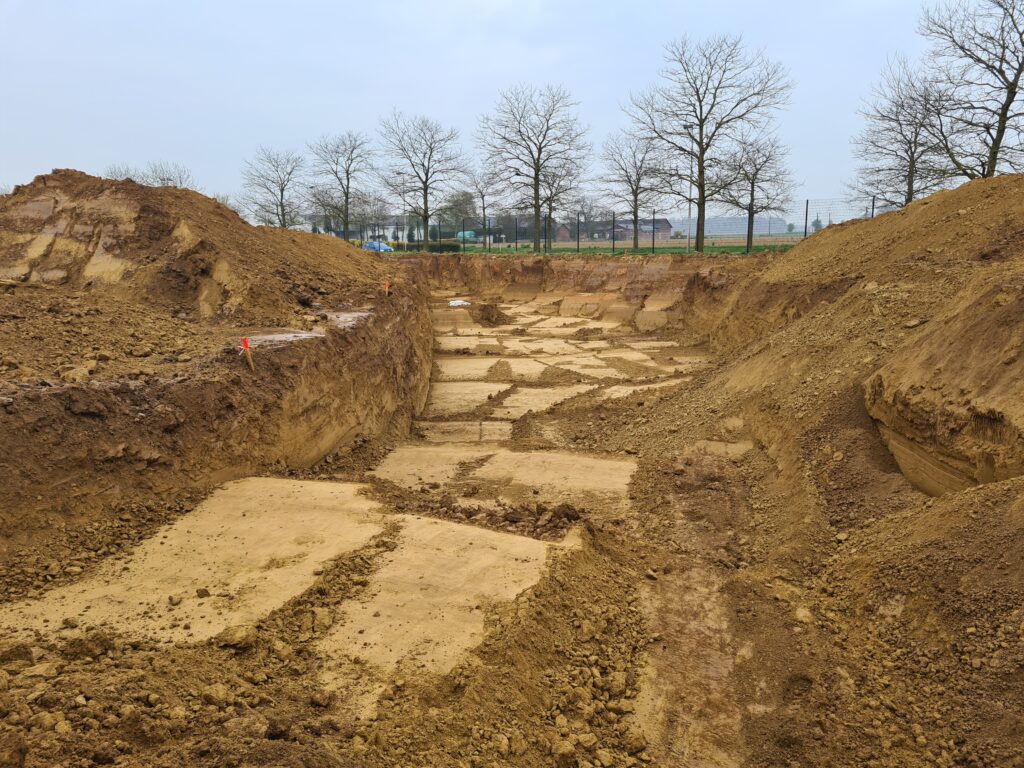 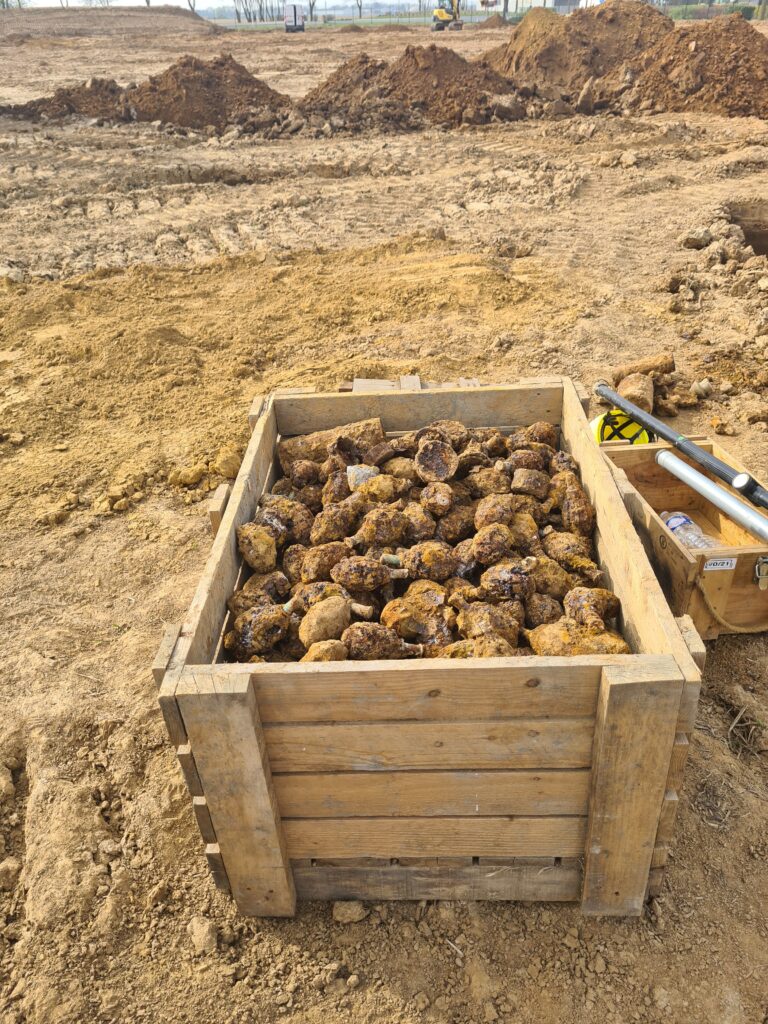 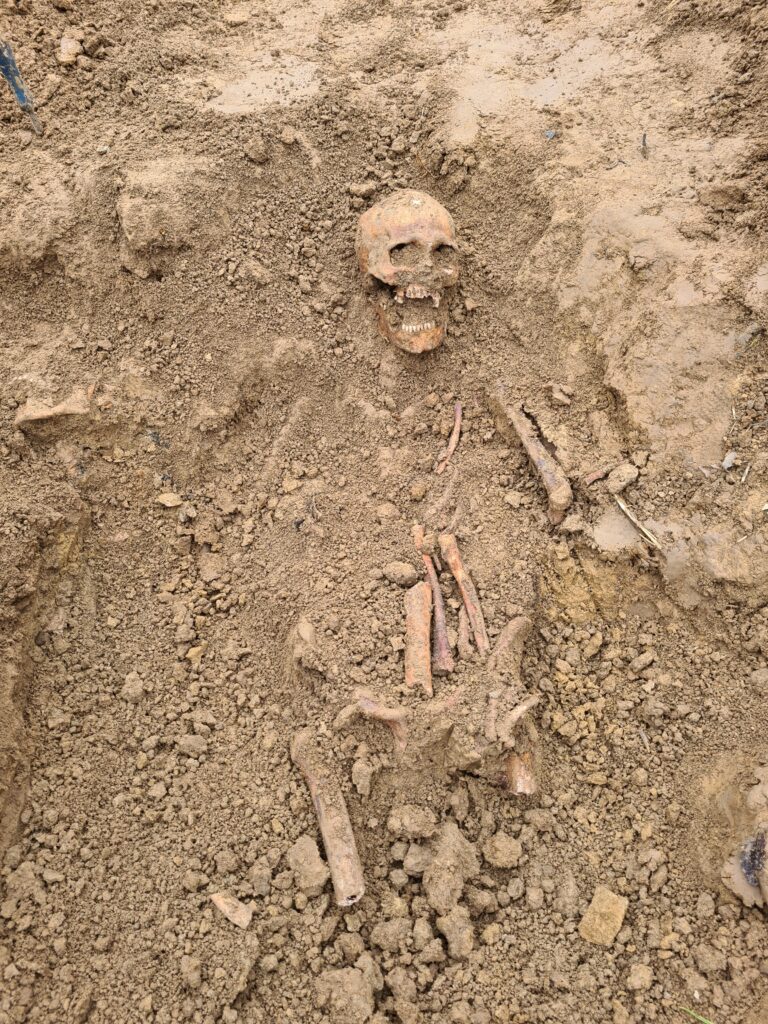 Discovery of a German soldier

The most important discoveries were those of numerous human bones, some of which were very complete skeletons. Each bone found has led our teams to report the event to the Gendarmerie Nationale, et the teams from the Office National des Anciens Combattants et Victimes de Guerre (ONAC) went to site to try to identify the human remains.

The magnitude of the exceptional discoveries realised during these operations not only testifies to the still very real risk of unexploded ordnance in France, but also to the importance of pyrotechnic clean-up missions during works operations, mainly in areas with a long history, such as the Somme. The combination of our qualified teams in the field, our geophysical experts and the many innovative tools mobilized enable us to secure this site. 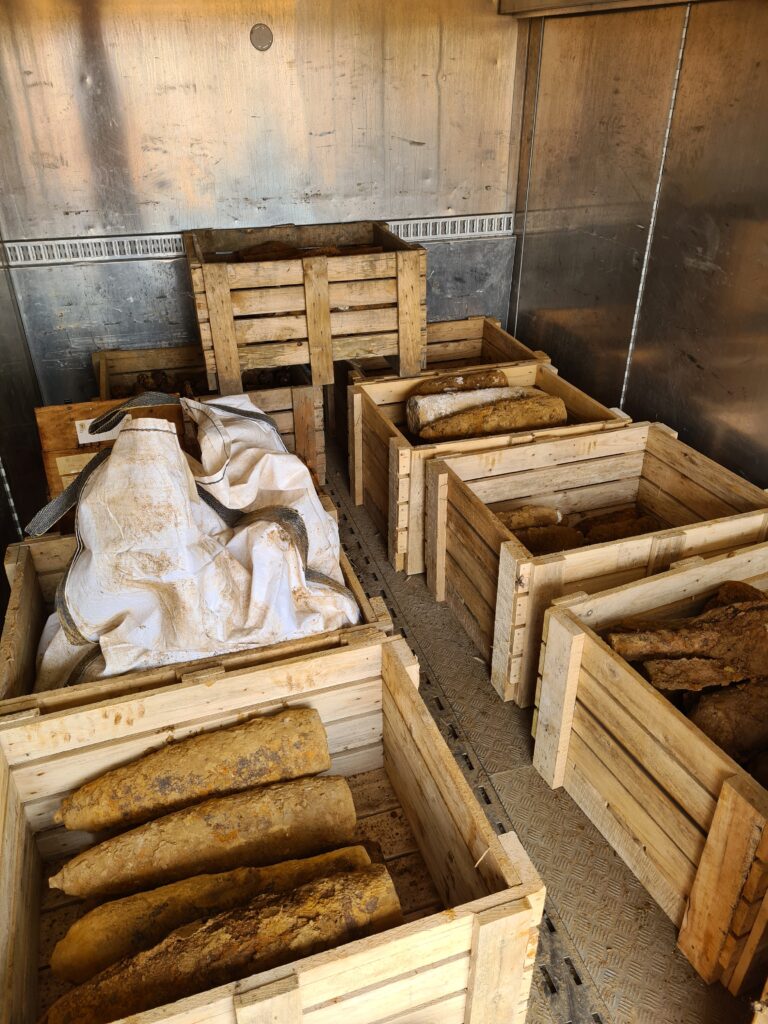 Recovery of ammunition by the Demining Service of Laon